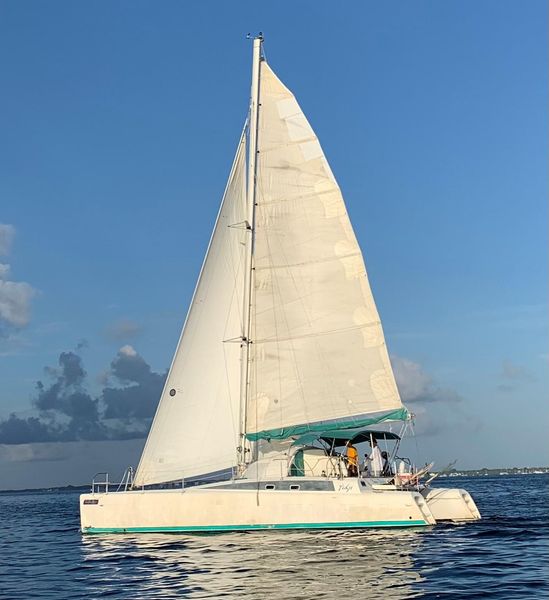 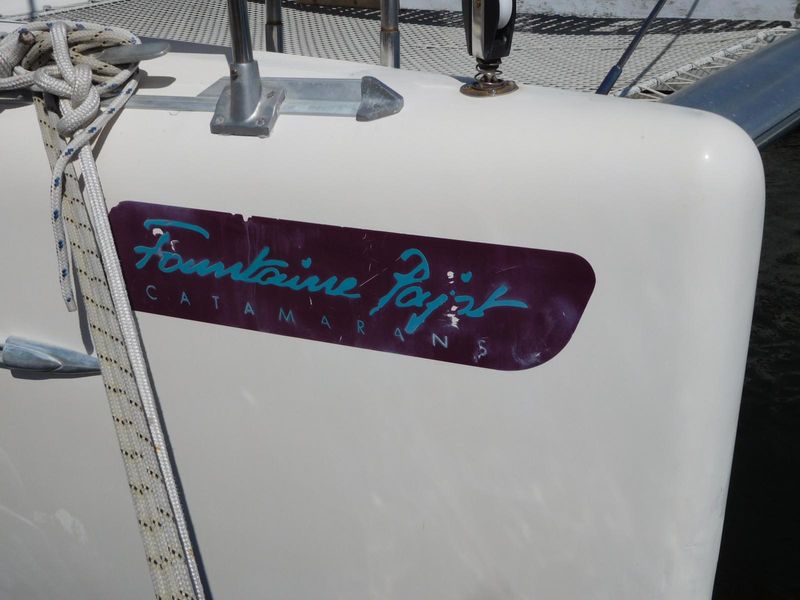 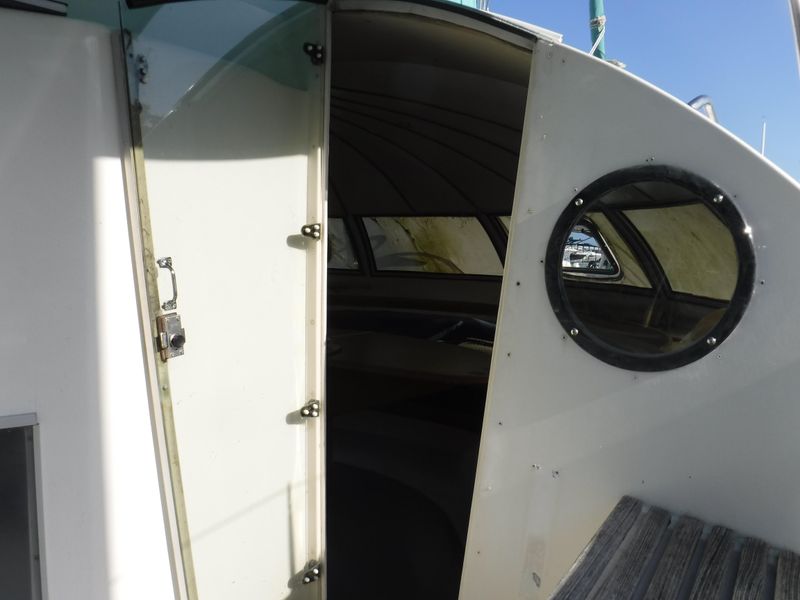 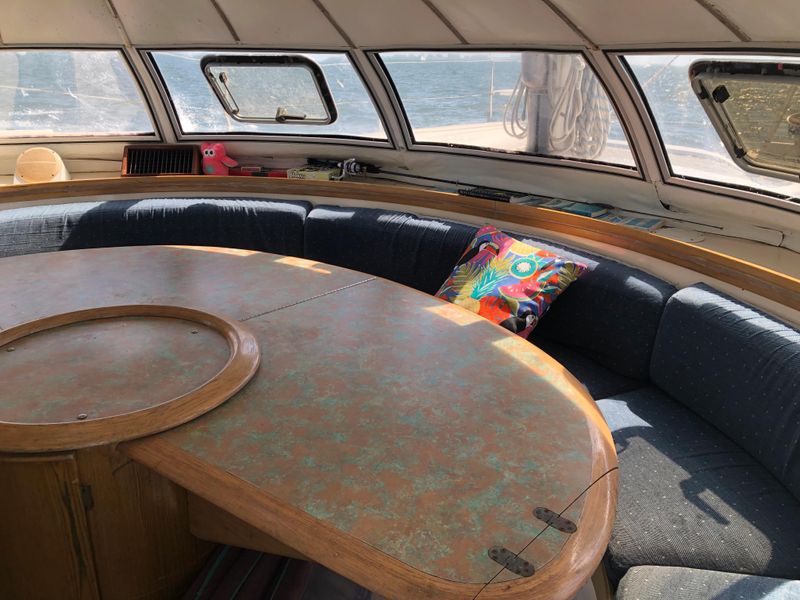 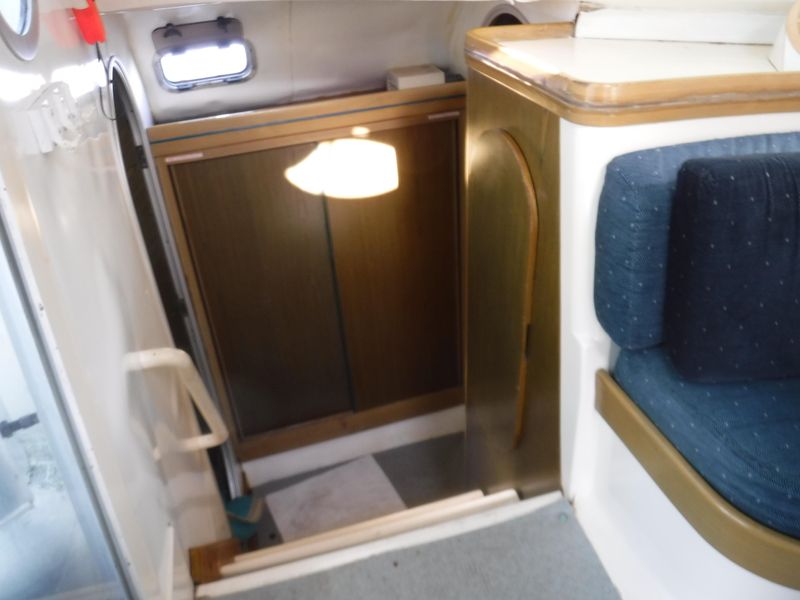 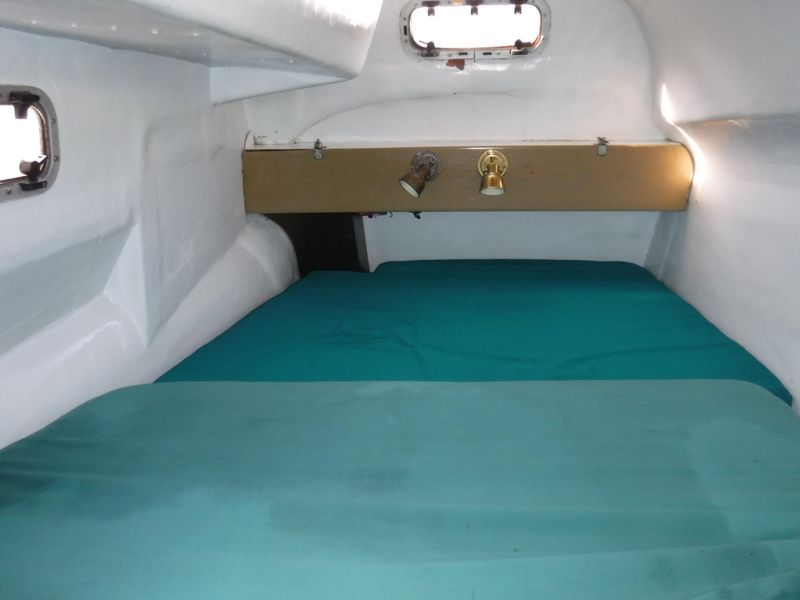 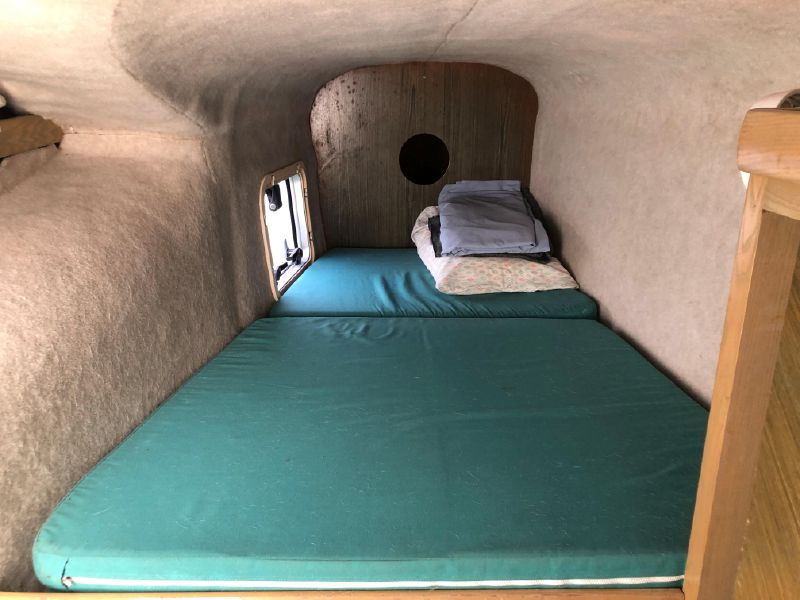 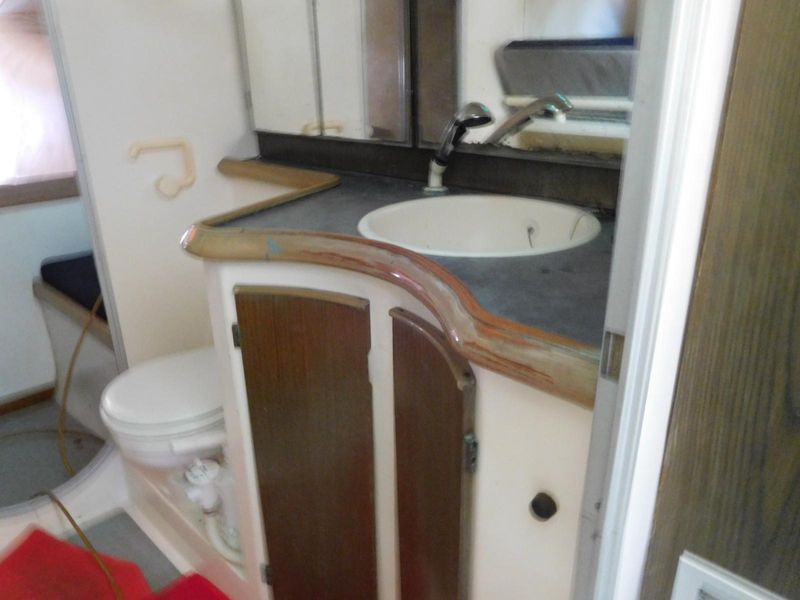 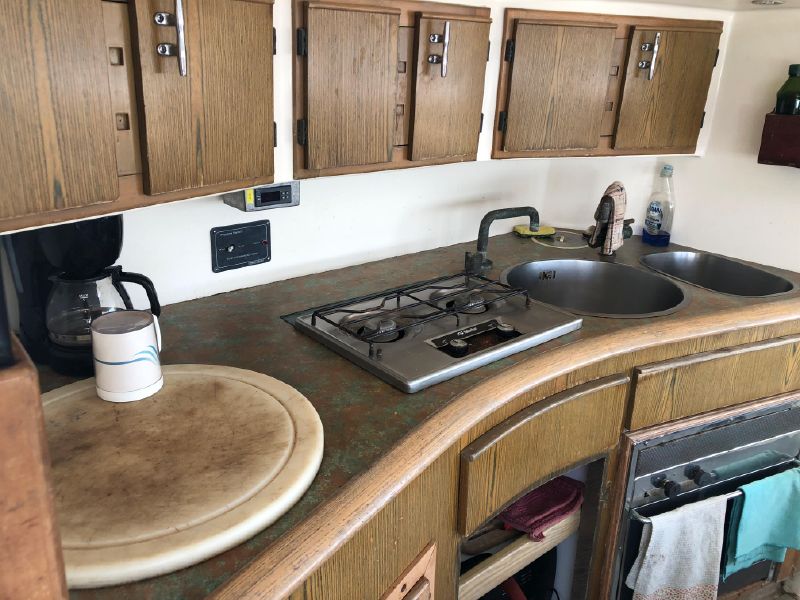 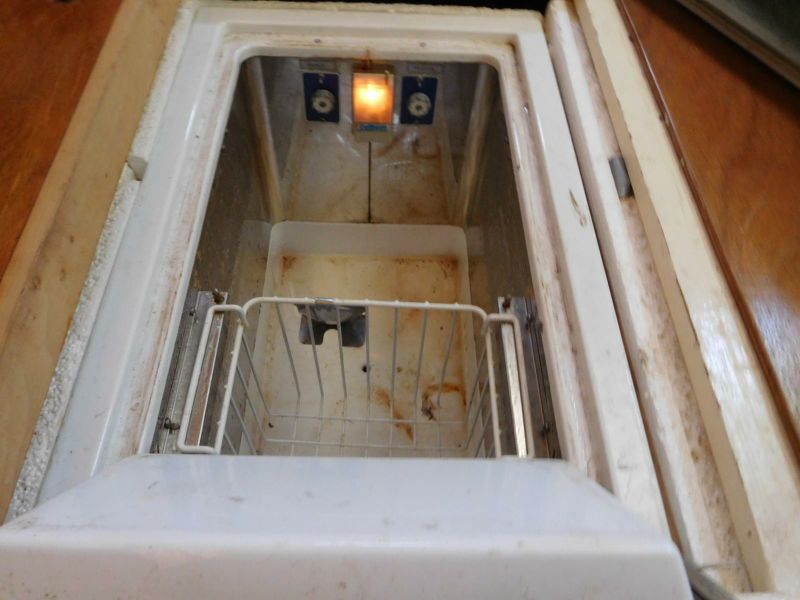 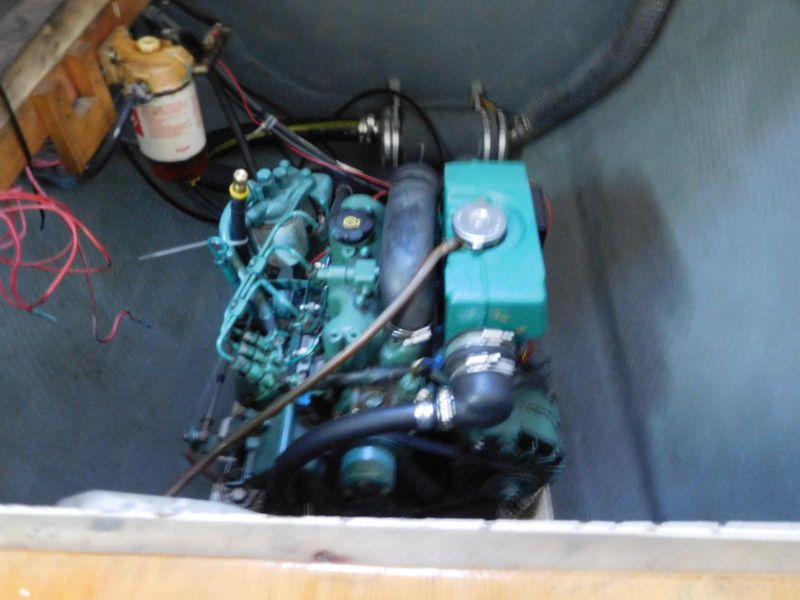 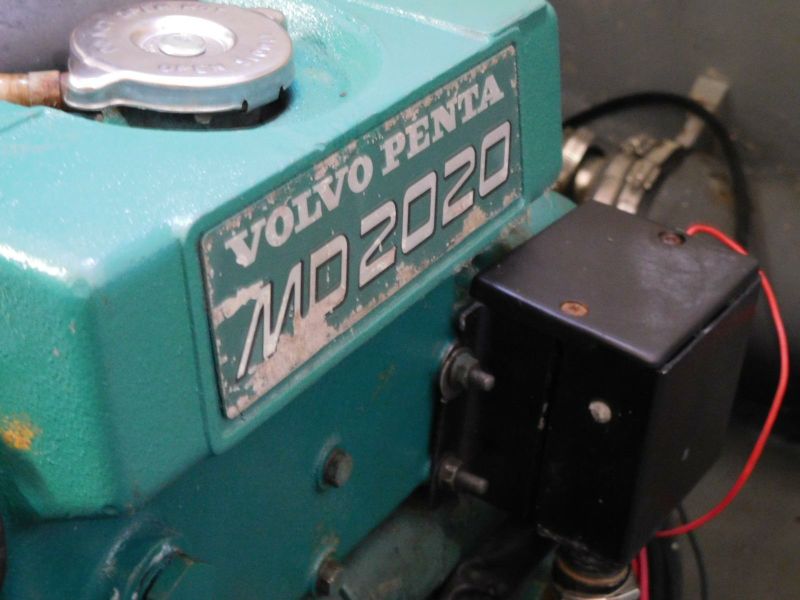 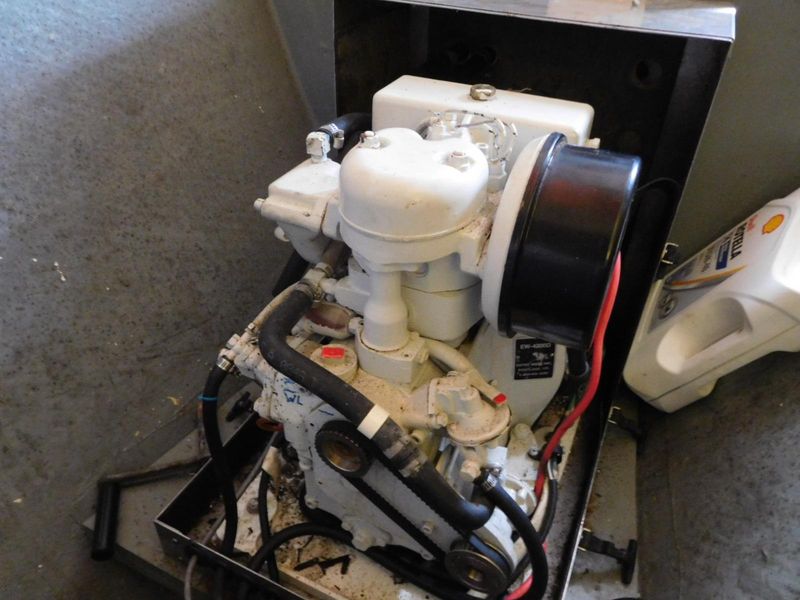 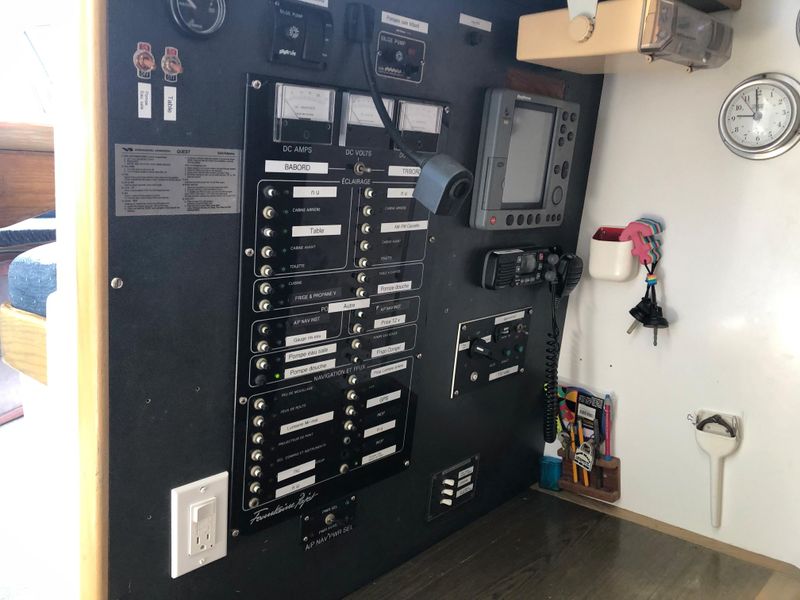 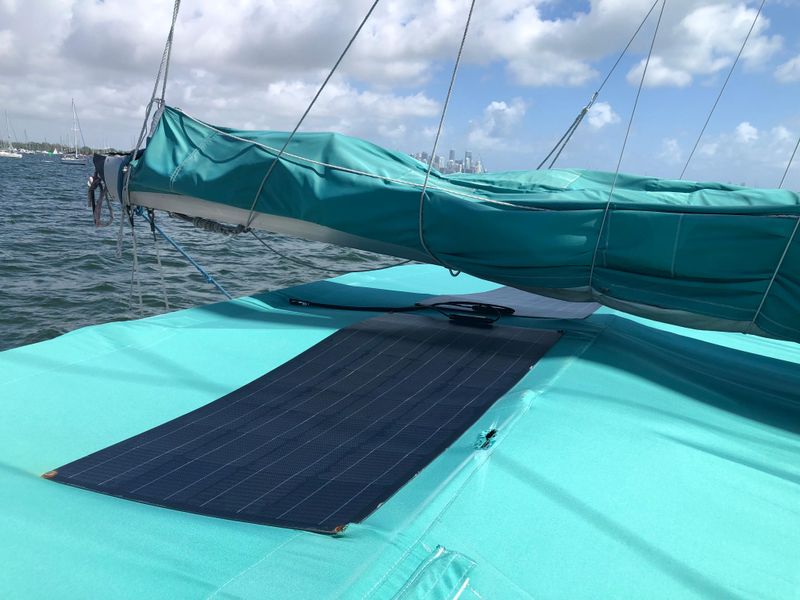 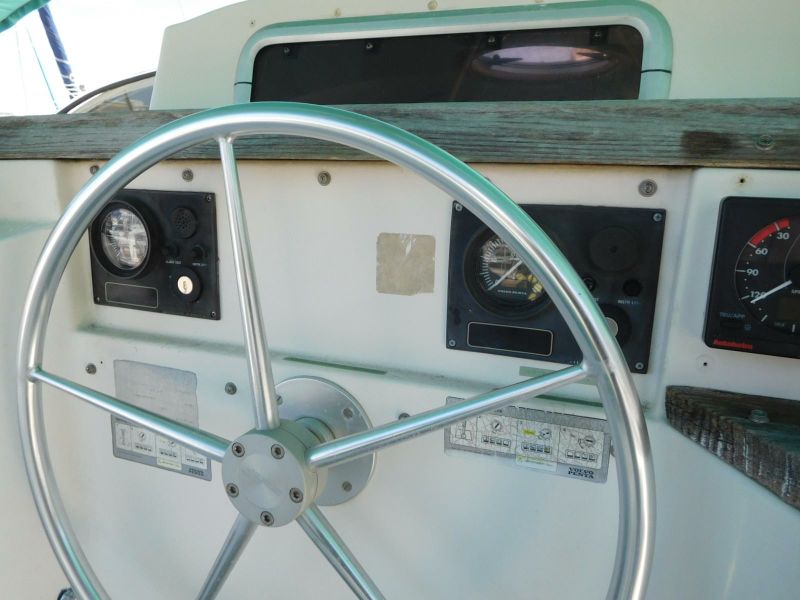 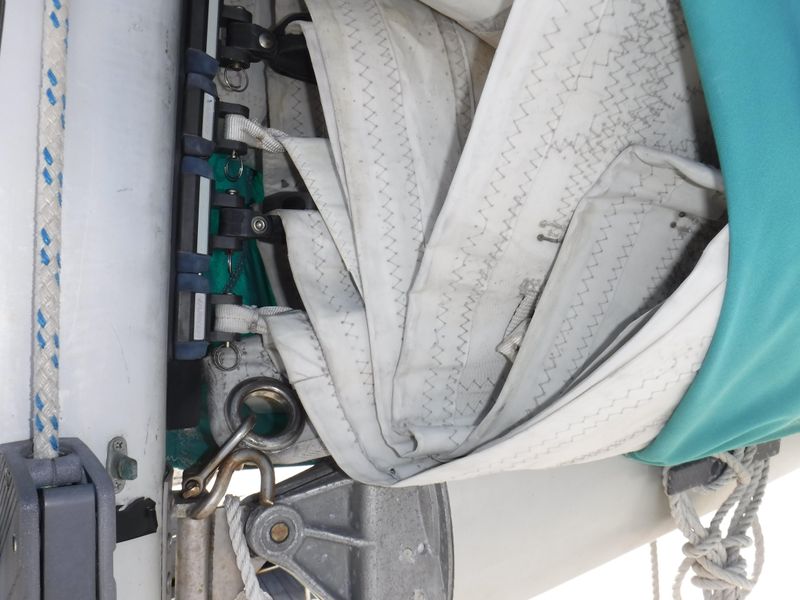 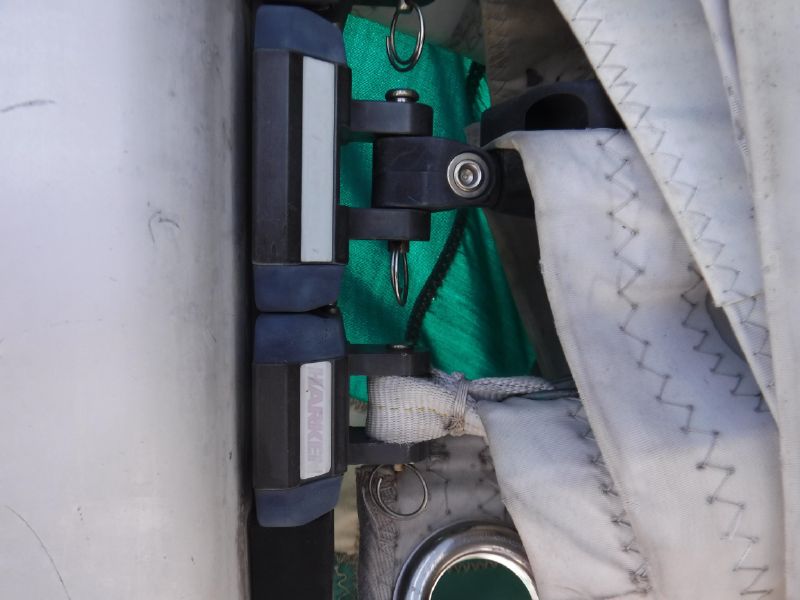 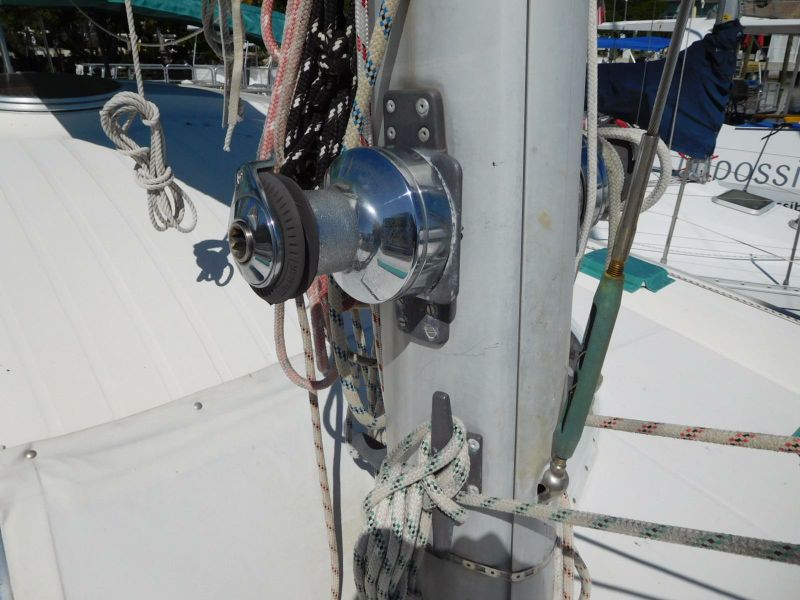 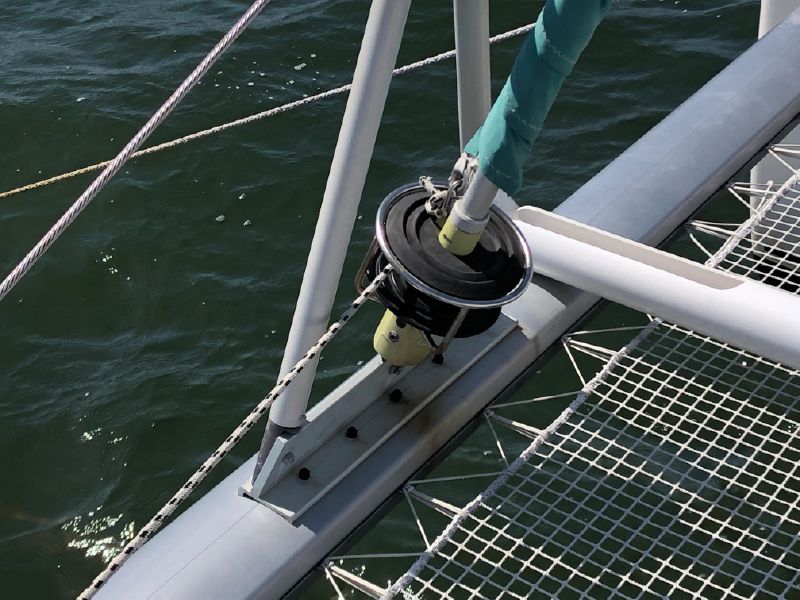 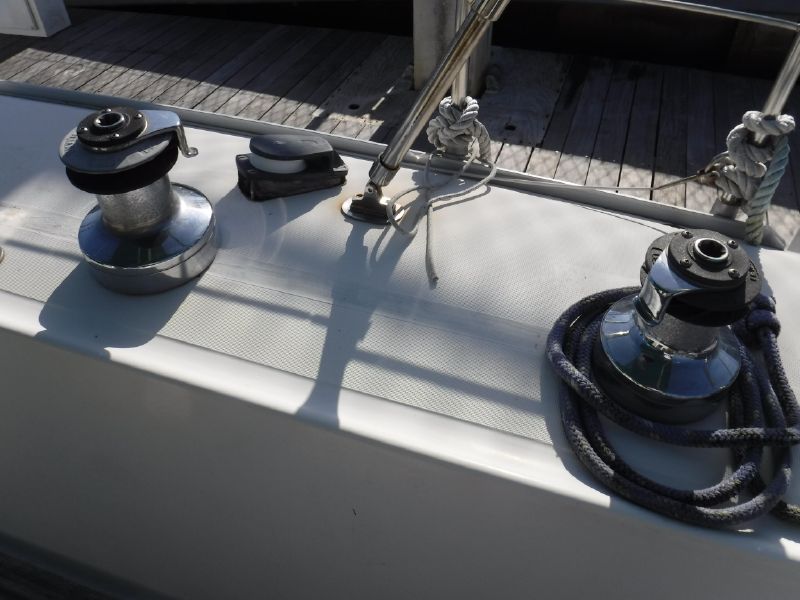 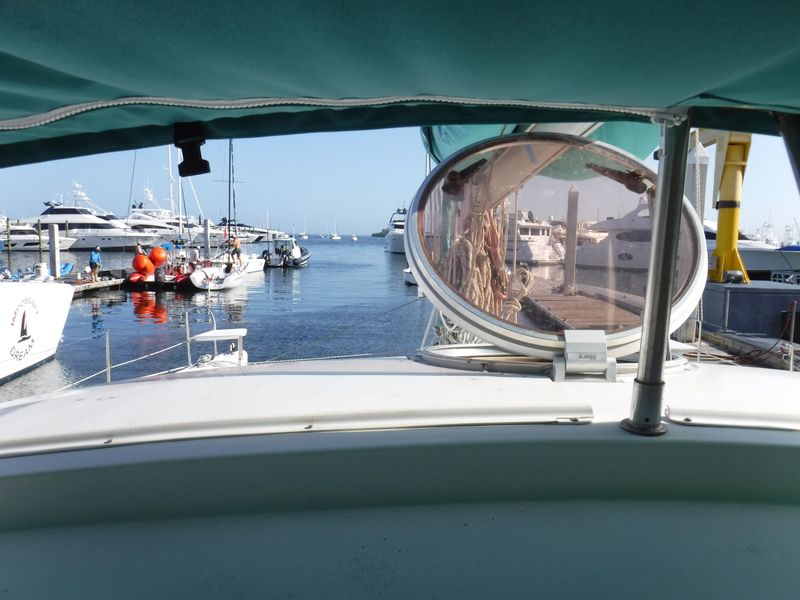 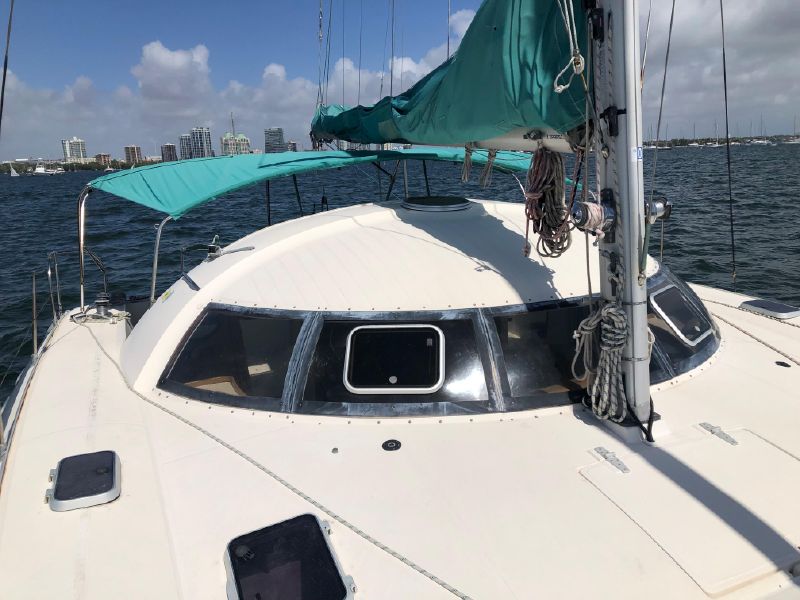 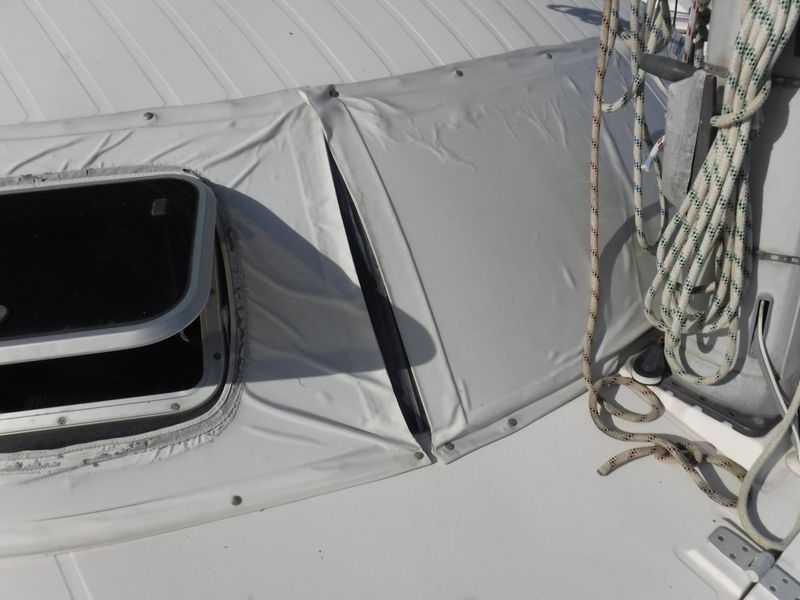 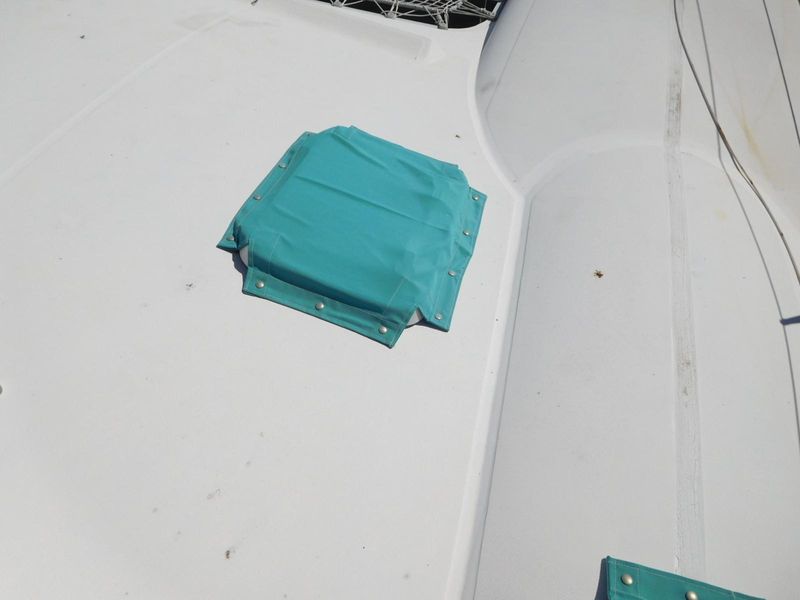 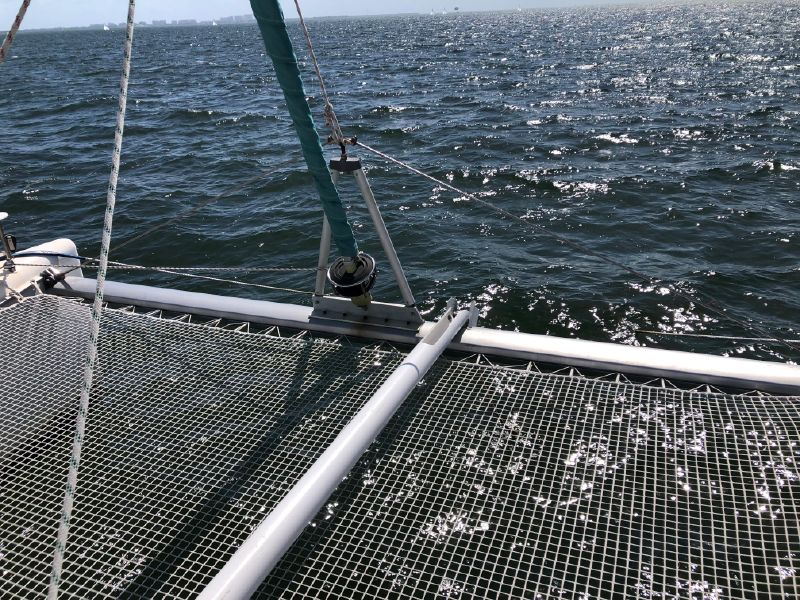 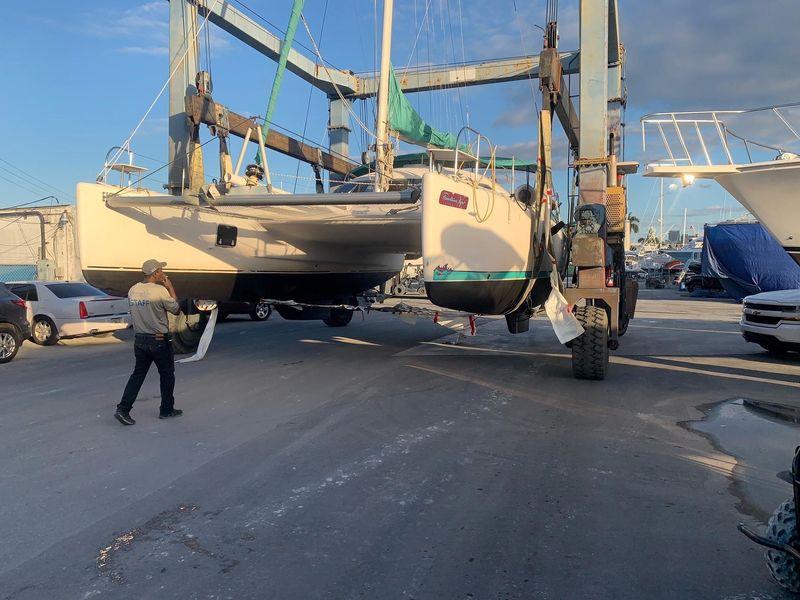 After a lot of sweat and tears, some great improvements and upgrades, fresh bottom and trip to the Bahamas and back, Dream Catcher is back on the market.

“The Fidji 39 is one of Fountaine Pajot’s early cruising catamarans with the classic narrow hull and rounded bridge deck.  She is fast and easy to handle, with enough comfort to live aboard on extended periods : practical galley and welcoming saloon.  These early Fountaine Pajots look like space ships. The priority was to minimize the windage from the coach-roof at the time.” Only made a couple of years before being replaced by the Athena and Lavezzi.

Dream Catcher is a 4 cabin/2 head layout with twin Volvo 20 hp diesel engines and an Entec 4.2KW diesel genset.  Good sails.  Canvas hatch and window covers.  And an A/C in the salon to keep things cool.

Number of cabins: 4
Number of heads: 2

The Fidgi is a 4 cabin layout with a berth forward and aft in each amah. The starboard aft is probably considered the master as it is next most accessable and open and incorporates the nav station.   There are two heads amid-ship in each amah and must be transited to reach the forward cabins.

The salon is small with a large round table forward surrounded by the windshield and a small galley aft under the cockpit helm station.

A CruiseAire a/c unit is in the port head and is vented into the salon.

The galley is small but with considerable cubbies and storage for its size.  There is a Surbuba 2 burner propane range and a sepatate oven under the counter.  A small fridge is also under the counter and a second large fridge is under the starboard berth.

Propulsion is provided by 2 Volvo MD2020 3-cylinder diesel engines located under the aft berths.  Total hours are unknown but the port engine has completed a major overhaul in 2021. Access is good after removing the mattresses and bases.  Sail drives were serviced and new seals replaced during haul out in late 2021.

The electrical power is 110V provided by one 30A shore power cord or an Entec EW4200 diesel genset in a stainless sound shield located under the port forward berth.

The 12 V system has multiple batteries (mostly new) throughout the boat.  The current owner spent considerable time to rewire and reset the 12 V system.  The electrical panel was rewired with new breakers where necessary.

Solar panels (2 x 300W) were added to the bimini top and are wired into the systerm.  A new 1500W inverter was also added,

The electronics at the nav station include a Raymarine RC520 color plotter/GPS and a Standard Horizon Quest VHF mounted on the panel.

The electronics at the helm have the Ray ST6001+ autopilot display, and an  Autohelm Wind and Multi display.  In the salon by the dinette is a Ray ST60 Depth display as well.

The rig is a standard catamaran fractional rig with a large battened mainsail and furling genoa on a Z Spar mast. There is also an asymmetrical spinnaker included.

Halyards are on the mast and controlled by 2 x Lewmar ST40 winches at the gooseneck.

The ground tackle is a Delta plow anchor on chain/rope rode run from the center tramp to the electric Maxwell windlass.  A second Danforth style anchor is also stored under in the anchor locker.

Davits are on the aft deck.

The Company offers the details of this vessel in good faith but cannot guarantee or warrant the accuracy of this information nor warrant the condition of the vessel. A buyer should instruct his agents, or his surveyors, to investigate such details as the buyer desires validated. This vessel is offered subject to prior sale, price change, or withdrawal without notice.

This boat may not be listed by Massey Yacht Sales & Service and may be listed by another brokerage company. This listing is made available as a courtesy to those visiting our website.

The advertising broker is merely providing this information in an effort to represent you as a buyer in the purchase of this vessel.