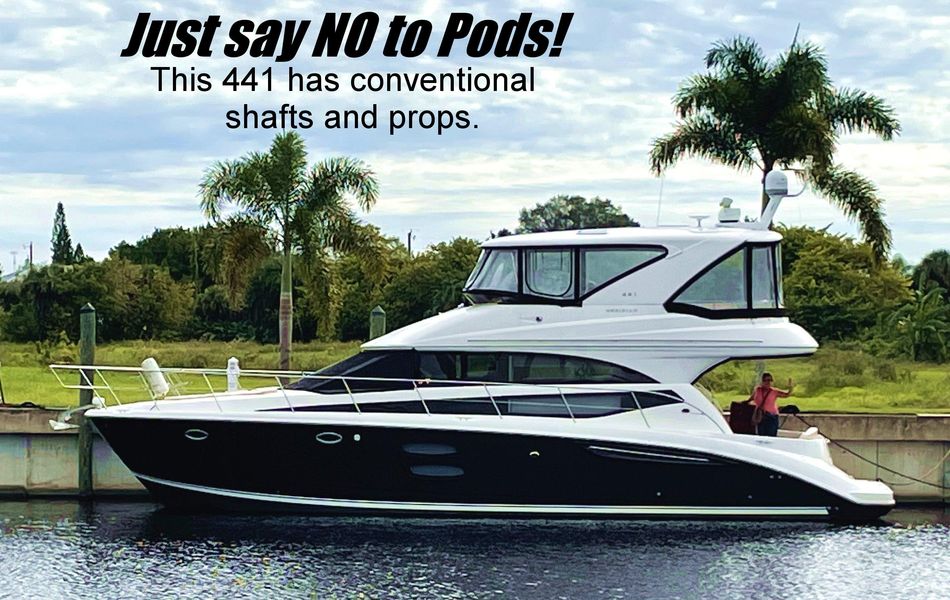 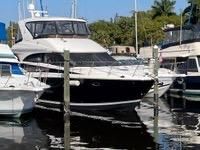 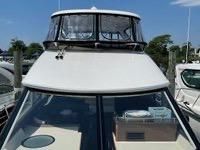 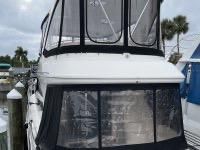 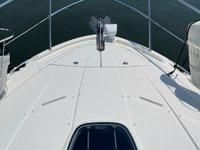 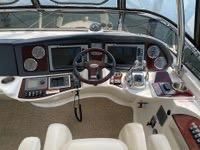 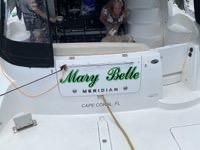 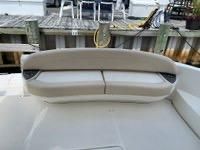 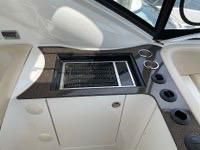 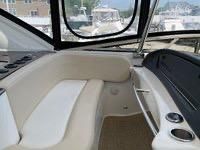 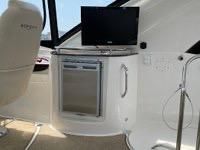 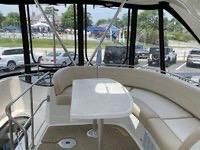 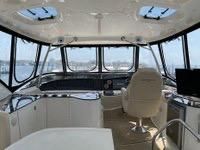 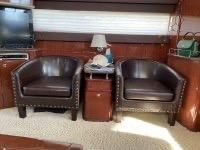 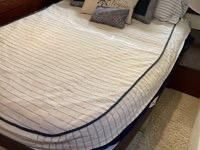 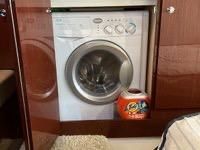 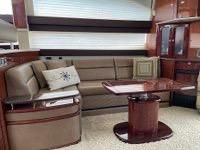 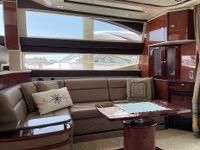 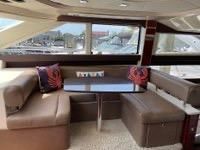 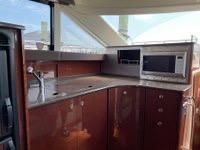 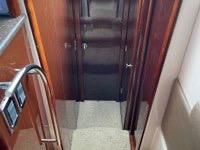 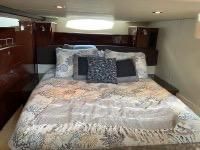 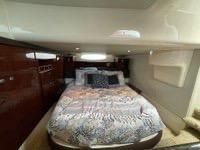 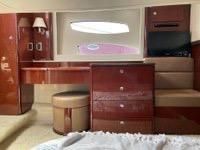 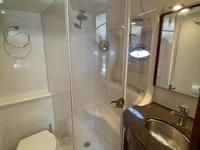 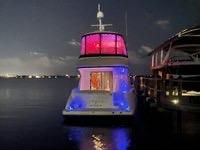 This Meridian 441 has traditional shafts and props.  Yes if you do a little research you will quickly find out that the Zeus Pod system is a very innovative and desirable drive system… except when it breaks!  Yes the pods are somewhat more efficient than shafts and props but they can easily cost tens of thousands of dollars in maintenance and repairs.  You’ll never make this up in fuel savings.  It’s true, when they are new they are wonderful but once they rack up a few hours look out.  For instance if you would happen to hit an obstacle in the water and shear one off, you better be prepared to spend upwards to $40k to replace it.  Plus who knows how long your boat would be out of commission.  Damage a boat with traditional shafts and props and the cost is a fraction of that.  Any competent yacht mechanic can service this Meridian 441.  Not so with a pod boat. BTW this yacht has never seen any damage of any kind.

More on the Zeus Pod System

When we were doing our research on yachts, the pod system looked very interesting.  So I called several Zeus Pod authorized repair centers to chat about them.  I got answering machines on two but the service center in (name removed) was willing to talk.  After about ten minutes of chit-chat the tech said let me sum it up in two words, “Stay away”.  He said he had two customers that had pods boats and they were constantly in the shop.  Both ended up selling them.

A Note on Condition

This Meridian 441 is in remarkable condition.  One reason is her low hours but the most notable reason is the fact that she has spent over ninety five percent of her life in New York where the boating season is short and the sun is very mild compared to the Florida sun.  We brought her down the coast  in November of 2021 and initially spent two weeks in the Cape Coral area.  Then we cruised her inland to the big indoor, air conditioned, storage facility in Labelle FL.  We went out to Cape Coral again mid January to mid April 2022 and she now sits in air-conditioned comfort at the River Forest Yacht Center in Labelle Florida.  She has a fresh coat of wax and she’s looking sexy.  So basically she has only been out in the Florida sun for 3 ½ months of her entire life.  The control console in her flybridge still looks new and there are no signs of fading or cracking anywhere on the boat.

We found out in a hurry how expensive diesel fuel can be so we experimented with various power settings and speeds to minimize the impact on the old wallet.  The computer screen in the console makes it easy with instant fuel burn, GPS speed, fuel levels and all kinds of valuable information.  Surprisingly when Meridian switched to the bigger more powerful 480 HP engines the economy actually went up at moderate power settings.  If you’re not in a hurry she will cruise at 9 MPH and only burn 6 to 7 gallons per hour total (total fuel burn of both engines).  You heard that right only 6 to 7 gallons per hour to push a house sized boat through the water.  Of course if you are in a hurry your last name needs to be “Trump” because we all know how much one of these boats can use at high cruise.    On smooth water she will cruise a tick below 30 MPH.  Although we did a lot of running at low power settings, we would run her up to cruising speed occasionally to clean her out.

The option list on this 441 is too long to list.  She has 6 air conditioners. There are 2 in her flybridge alone.  Other than pods she has about every possible option that Meridian offered in 2012.  Everything works except for the DVD player in the flybridge which we never used.

With twin engines and bow and stern thrusters, you can pretty much put this yacht anywhere you like.  We replaced the stern thruster contact pack so the whole system works like new.  The steering and throttles are up against the starboard flybridge window so the captain can look down and out of that window and see the whole starboard side of the boat which is very nice when docking.  Many older yachts have the controls in the middle of the helm so you can’t really see what you are doing.  Even though I am a newbie to yachting I had very little trouble docking and maneuvering this boat and we had to put her in some pretty tight spots.  It’s all about taking it slow.

Just ask Greg Skiff anything you need to know about the Mary Belle. If he doesn’t know the answer I will be glad to provide answers to the best of my ability.  As a side note, should you want to change the name I know a graphics shop in North Ft. Myers that did the graphics on the back and both sides of the Mary Belle for only $89.00 installed.

There is nothing more satisfying than yachting with your family and friends.  This yacht can easily be operated and maintained by an owner-operator with very little need for hiring a captain except for getting some highly recommended training.  My experience was only with lake boats before we purchased the Mary Belle. But with a some training and practice I built up my confidence and I was on my way.  The three main rules rules for operating this boat or any boat are always heed the weather, get adequate training and practice, practice, practice.

Number of cabins: 2
Number of heads: 2

Manufacturer Provided Description
In designing the 441 Sedan, Meridian's team of naval architects developed a new hull, deck, bridge and shearline. This design features a more aggressive profile and hull-side windows for the guest stateroom, easier bridge access, better topside accommodations, and more natural light and woodwork in its interior living spaces. The 441's wide-open floor plan ensures smooth flow and unbroken lines of sight between the salon, the yacht's dedicated dinette and the full-service galley. What's more, Meridian has further enhanced its signature integrated two-tier window system to ensure improved visibility from all these interior areas. A lower helm station is available. Plus the 441's impressive two-stateroom, two-head layout provides a gracious master suite, located forward with a queen-size island berth with innerspring pillowtop mattress. The spacious amidship guest stateroom, which spans the yacht's beam, features a double berth, thoughtfully appointed vanity and settee and plenty of storage.
Disclaimer
The Company offers the details of this vessel in good faith but cannot guarantee or warrant the accuracy of this information nor warrant the condition of the vessel. A buyer should instruct his agents, or his surveyors, to investigate such details as the buyer desires validated. This vessel is offered subject to prior sale, price change, or withdrawal without notice.

This boat may not be listed by Massey Yacht Sales & Service and may be listed by another brokerage company. This listing is made available as a courtesy to those visiting our website.

The advertising broker is merely providing this information in an effort to represent you as a buyer in the purchase of this vessel.